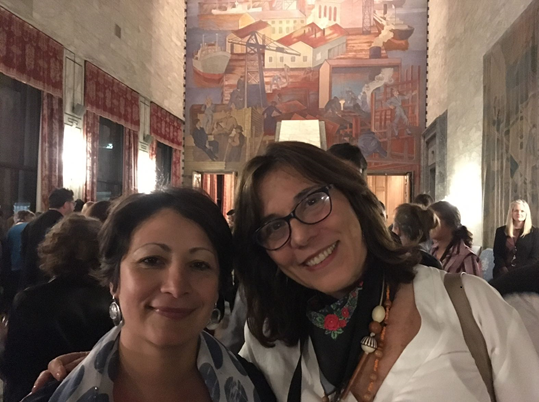 Dr. Nidia Catherine González, PhD. Graduate from Johannes Gutenberg University Mainz, Professor at the Faculty of Law, Government and International Relations at the Universidad Santo Tomás, Bogotá Colombia and currently Research Fellow at the Earth System Governance Project, gave a very vivid practical input at the panel discussion in Oslo picking up on her work with indigenous peoples in Colombia [Cauca and Caquetá]. She elaborated on the knowledge present in indigenous practices such as swidden or shifting cultivation systems which optimize the use of soil nutrients by making appropriate changes in the crop mixture in multispecies systems and recognizing a correlation between the nutrients of certain species through height and length levels. This practice creates traditional agricultural itinerant cultivation areas, a kind of plant gardens mimicking the diversity of forest; they are called Chagra by many native populations in the Andean and Amazonian region. The Nasa people in Cauca, Colombia, call it Tul, in Venezuela Pemón people call it Conuco. In agroforestry, Chagra is a practice common to indigenous peoples in Asia, Africa and South America who over millennia have developed their own specific methods.

González considers that this traditional knowledge is directly connected to scientific knowledge. Since a few years, remote sensing has confirmed that indigenous territories encompass up to 80 percent of the planet’s biodiversity. The verification of these technological advanced systems allow for different crucial interpretations regarding the challenges of forest governance. In many places, indigenous peoples have been stewards of their forest and been devoted to keep them in a natural balance. As a scientist, González believes that it is important to document this knowledge and make it visible, heard and respected. Managing the Chagra is managing the forest, as to manage Chagra links multifold needs such as biodiversity, food security, waste concerns, agroforestry and public health. She considers Chagra as a clear example of the Connectedness of indigenous practices, its political significance to transform current governance into more holistic, equity and inclusive forest resource management. Some of her recent papers shed light on the concept of Connectedness to clarify the relationship between Western Scientific Knowledge Ontology and Indigenous Knowledge Ontology. The concept of Connectedness in Indigenous Knowledge Ontology represents the intrinsic interdependence of the larger whole and the place of humans in it, namely a plural interrelated existence for everyone and everything, even in the case of polarities. Her idea is to use this concept to explain that Scientific and Indigenous ontologies should not be expected to form a uniform whole. Rather, we should seek those pieces of knowledge and values that are shared between both ontologies.

Here some links to her work:

Within the global setting of legal frames and policies that articulate standardized definitions and indicators, her work focus on avoiding over-simplifications of local contexts identifying new concepts is to allow the circulation of knowledge across multiple levels of governance. In the last years, in the collaboration with different NGOs in Colombia, she has written policy briefs and brochures for local communities on legitimating indigenous knowledge to enhance sustainable management at national and International levels. Her academic contributions aiming to cover a widening gap on research on forest governance stem from the possibility of exploring ways to articulate commonly used forest definitions with the traditional knowledge present in the practices of indigenous people to overcome forest degradation and deforestation in an inclusive and equitative manner.

Dr Bibiana Bilbao, PhD is a field and experimental ecologist, currently Professor at Universidad Simón Bolívar, Venezuela. Starting from 1998 to present time she has undertaken a series of participatory and intercultural action-research projects working with the Pemón indigenous people in Canaima National Park (CNP), Venezuela, for the integration of traditional Indigenous and scientific knowledge into fire management policies and their potential as local solutions for global climate change problems.

CNP, located in the centre of Guiana Shield, Venezuela and inhabited by Pemón Amerindian people, is considered a conservation landmark due to its size (30.000 km2: the 6th biggest park worldwide), and the high number of endemic species. Despite low soil fertility, fragile forest ecosystems coexist with large areas of savanna in CNP, where these indigenous communities have been able to maintain a sustainable management of natural resources. Conflict has arisen over fire management in the Park, because while fire plays an essential role in the Pemón way of life, the policy of the park authorities has been fire control and suppression, considering fires as a threat to forests conservation. Through the development of a systemic approach, based on learning together and long-term cooperative fire experiments with Pemón Indigenous communities and the collaboration and exchange of different stakeholders, a shift of the fire paradigm was successfully negotiated that valorise the relevance of Pemón millenary culture for a sustainable resources management as well as adaptation to climate change. Furthermore, ecological studies showed fire exclusion promotes “megafires” by accumulation of fuel material enhanced by current drier and hotter climatic conditions. Thus, a fire suppression policy is being replaced by the implementation of a patch mosaic burning system in the indigenous way and wisdom, in which recently burned patches of savanna serve as firebreaks, reduce the risk of hazardous wildfires, especially in the vulnerable and diverse savanna‐forest transition areas. Furthermore, the use of “conuco” burning practices within forests increase soil fertility, as part of shifting cultivation practices for food production; and along savanna-forest borders during hunting periods to capture animals. Similarly, this new fire management plan for the Park will consider both traditional, technical and scientific knowledge to decide where, when and how to set fires, as well as include formal agreements between communities and governmental institutions.

Recently, these findings and advances have been shared with neighboring Brazil and Guyana, thanks to academic international partnership and funding by the British Academy. At present, important efforts for the formulation of a legitimate intercultural and participative management policy in the Park based on the integration of multiple perspectives (Indigenous, academic and institutional), are carried out to enhance sustainable and socially just fire management, acknowledge the pluralism of resources of knowledge, empower Indigenous communities, and strengthen their practices and cultural heritage.